How Much Does It Cost To Make An App?

So you came up with a brilliant mobile app idea, and now you have one question: how much will it cost to build it?

We get this question nearly every week at Doc4, and unfortunately, the truth can be a little disheartening: app development is expensive! There's just no getting around it. Unless your app idea is ridiculously simple, you're looking at around ten grand just to get started.

And the more complicated the app, the higher the costs. It may be a little surprising just how easily you can end up spending well over $100,000 for an app that has a few of the more common 'bells and whistles' like push notifications, in-app purchases, etc.

Now, we know what you're probably thinking: "$100,000 for a lousy app? Are you out of your mind? I'm not building Pokemon Go over here – my app is pretty simple…"

We get it: we know that you didn't come here to learn how much apps generally cost – you really came here to get an idea of how much your app would cost.

The truth is, without sitting down with some of our developers and mapping everything out (which we would totally recommend) we just can't give you any kind of accurate cost estimate for your app.

However, what we can do is give you some insider info on how much your app might cost, based on over ten years of experience, extensive industry expertise, and the most up-to-date cost surveys we could find.

First, let's take a look at the following 'average app costs' from a range of surveys and app cost 'calculators'. 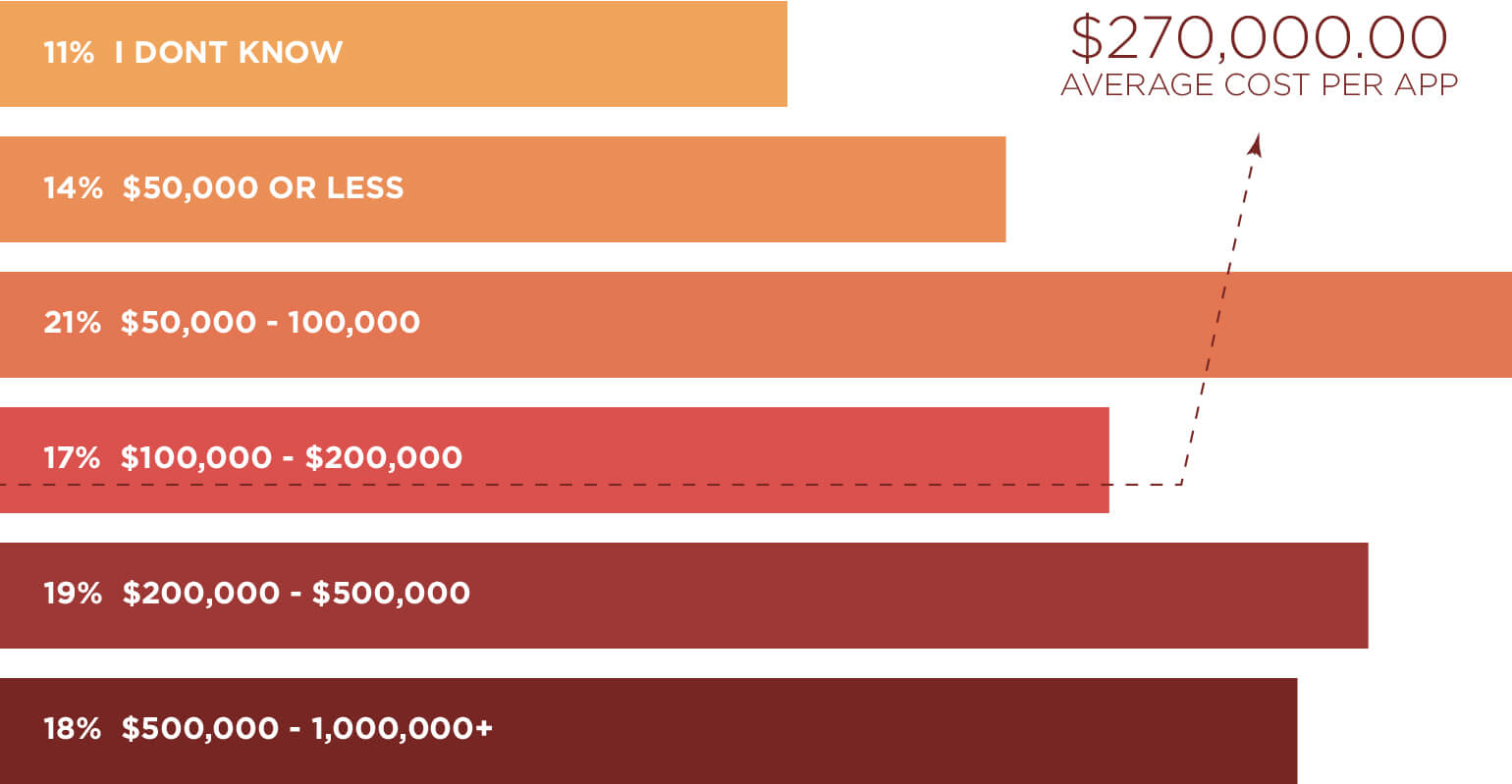 We can learn a few pretty important things by reviewing these averages:

For one, there is a very wide range within the averages themselves; anything from $38,000 to $270,000! Furthermore, these averages also demonstrate that it is indeed 'normal' to spend well over six figures for a decent mobile app.

Ultimately, what we're seeing is a (not so helpful) price range of roughly $30k to $250k for your app. To narrow that range down even further, let's take a look at the biggest factors that can affect the cost.

There are a multitude of factors that determine how much an app costs, so we've made six basic categories to simplify things a bit.

The location and size of your app development team can have a huge impact on the price of your project.

For instance, the Kinvey survey was drawing from large companies for their numbers, while the Crew calculator assumes you're going with a freelance developer, thus the huge difference in their averages ($270k vs. $55k).

We have noticed that app developers in big cities tend to charge more for their work, due to the higher cost of living. It seems to be a 30-50% difference in price on average, but we've also seen quotes for over $150k from 'big city' developers for projects where we would be asking more like $50k.

(Doc4 is based in Rogers, Arkansas, where the cost of living is pretty reasonable – but not charging as much doesn't taint the quality of our work. Skilled app developers can live and work from anywhere!)

Another good rule of thumb is: the larger the developer, the more expensive your app is going to be – at least in the short-term.

A freelance developer will usually charge less than a bigger shop, but freelancers come with a higher risk. If your final product does not work properly, it can cause huge headaches and much higher expenses down the road (if you have to pay even more to "fix" it or even worse, start over).

A huge app developer will typically get the job done right, but you have to pay for their higher insurance, overhead, salaries, operating costs, and technology conferences in Silicon Valley, which is why the price goes way up.

Unless you're a huge company, a small to medium-size firm that's aced some impressive projects will be your best bet (wink, wink!). App development companies like Doc4 can offer very competitive skill sets without the jaw-dropping fee.

The platform(s) your app is designed for is a big variable because each platform has its own set of rules for coding. So even though your app may look basically the same on different platforms, the structure will be very different behind the scenes – unfortunately, it's not a simple matter of 'cutting and pasting' code from one platform to another.

The first time we write code for an app for a particular platform, we wind up discovering what works and what doesn't by overcoming any roadblocks or unique challenges in the project. This discovery and learning process involves time-consuming testing and debugging to get your app just right, and it applies to both the iOS and Android platforms.

After the first platform is done, the second one is usually 20-30% cheaper because so much of the discovery and learning process is already complete.

The best route is usually building a trimmed-down version of your app on a website first because development is cheaper, easier, and faster. Building a 'web app' allows you to easily distribute your offering, get quick feedback, and make quick changes all in less than half the time it would take on a native app (i.e., an app that 'lives' on someone's device).

Our clients sometimes find that this initial web app is actually all they need, and they end up not having to spend the money for the native app(s). But for the ones who do move forward with a native app, there are fewer costly iterations.

Nearly anything is possible with apps these days. When our clients ask whether or not we can do something, we rarely say "no". The answer is the same almost every time: "Sure - it just takes time and money."

Below is a somewhat generic list of different features and functionalities that we get asked about the most. The prices are there to give you a very approximate, general idea of how much you can expect to pay for each feature in the category. Start with a base price of roughly $10k and add on from there to get a (very!) rough total.

If you are only trying to build your first version, or 'minimum viable product' (MVP), then don't worry about the extra costs of professional design.

However, when your app is ready to go public, you can't compete without good design work. You can hire an expert developer for the coding and an expert designer for the design, but that can involve a frustrating (and expensive) back-and-forth tug of war between the two.

The best case scenario would be to hire experts in design and development that have already worked together in the past.

'Scope Creep' is an industry term used to describe the way requirements for an app project tend to grow and change, often long after the project is underway. This factor is a sneaky one that people don't like to talk about, but one that hits your wallet either way.

Scope Creep can often be a result of failures during the planning stage, which again is why we recommend sitting down with our developers and carefully planning every last detail.

But even when everything is perfectly mapped out, there is virtually zero chance you are going to be able to flesh out every detail of your app prior to starting work on it. There is always at least one thing – usually several things – that you don't realize you really need or want until the project is underway.

Whatever the cost of your app, if you don't have a little extra budget in the tank (i.e, roughly 10% of the total cost), you could find yourself in a situation where your app is 95% complete, but you're missing a crucial element and the project has to be put on hold until you can come up with the funds.

To avoid this tragic (but common) outcome, make sure to either nail down your specifications and stick to them (which is ideal), or leave some money on the table for additions once the project is underway.

How Can I Really Know the Cost?

The complexity of app development means that it is almost impossible to figure out how much it will cost without carefully dissecting every facet of the desired capabilities, design, and platform.

A firm, no-nonsense quote is hard to find because developers won't know how much an app will truly cost you until they start to make it. That's why so many developers throw out huge numbers for every app that comes their way, or they simply offer an hourly rate with no hint at what a final cost may be.

At Doc4 Design, we don't want to just throw out huge numbers hoping some suckers will fall for it because they don't understand development costs. And we also don't want to have our clients sign on the dotted line for an hourly rate and then bleed 'em dry.

That's why we've created something fairly unique in the app development world – it's what we call a 'Spec Day'. We offer our Spec Day as a service to people who are serious about developing their idea and understand that it may take tens of thousands – or even hundreds of thousands – of dollars to do it.

Spec Days give you and your idea a full day of attention with an incredibly experienced developer that has thousands of projects under his belt.

We'll pick your brain and map out the entire project from top to bottom, complete with mock-up versions (called "wireframes") of every screen and element of your app. Then, we'll give you a rock-solid, 100% accurate quote that you can take to the bank, or – maybe more importantly – to any investors that will help support your idea.

Not only can you take your roadmap to investors, but you can send this roadmap to as many developers as you can find, allowing you to get lots of competing quotes without having to thoroughly explain your idea over and over again.

We could tell you that our prices and capabilities are highly competitive nationwide, but giving you this roadmap allows you to prove it for yourself!

Finally, with this roadmap, you can begin exposing your idea to potential customers immediately. With the paper mockup versions of your app, you'll be able to walk potential customers through what happens when you tap a certain button or swipe over a given section and get their crucial feedback – all without having to spend thousands of dollars for your first version.

Because we have to pull away our experts away from their work for a few days in order to create your roadmap, we charge a flat fee for the 'Spec Day' (ranging from $1200 - $2,000 depending on the complexity of the concept). However, if you decide to move forward with Doc4, we'll apply your Spec Day fee towards the total cost of the project!

Let's Say I Can Afford This – What's Next?

If the costs of app development covered in this article haven't scared you off and you're interested in taking the next step to get your idea off the ground, please reach out to us for more information about scheduling a Spec Day – it's the most affordable and least risky 'next step' you could ever hope for! 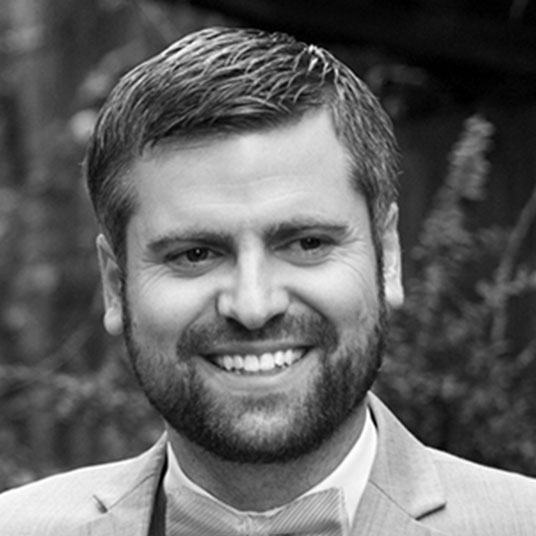